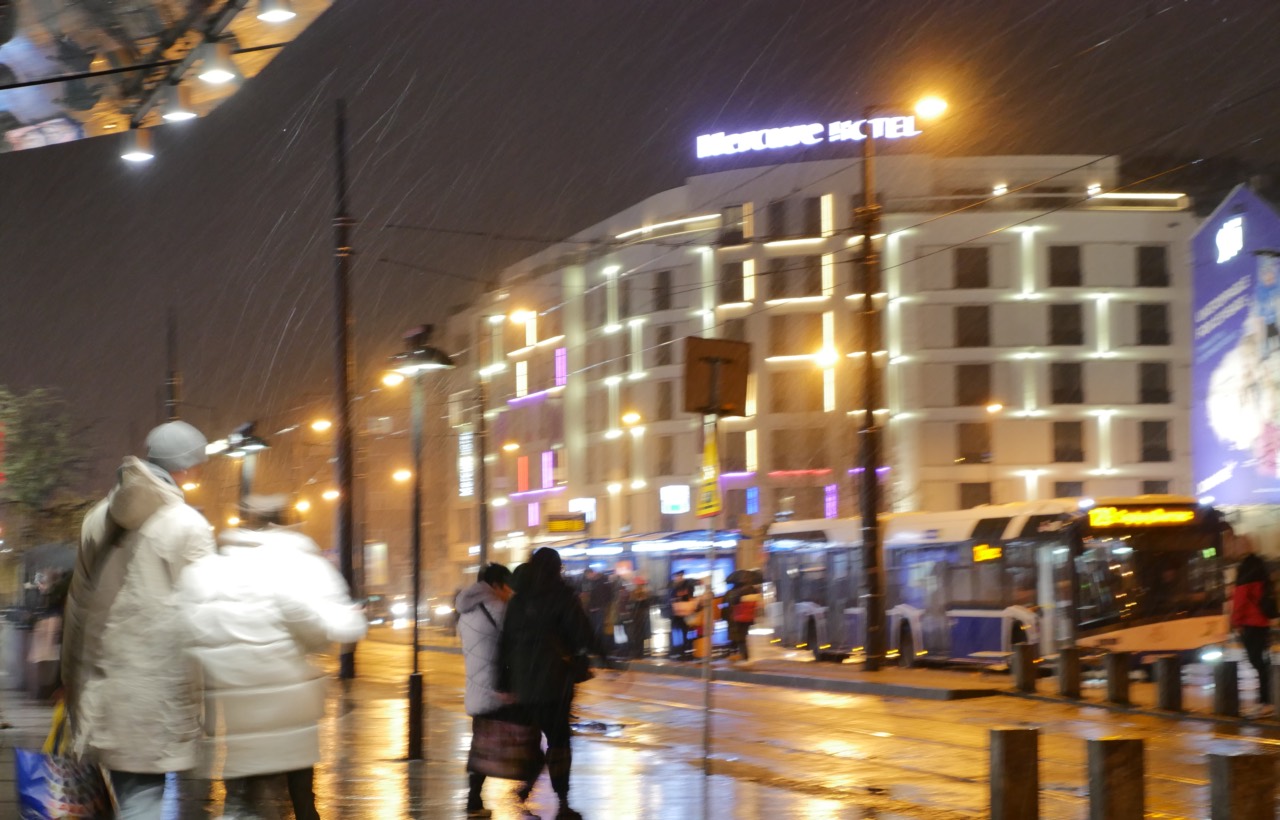 The last of my three interviews was with Carolina and Kasia, two Polish mothers, probably in their early to mid-30s, whom I found serving the remaining soup of the day from a giant, steel pot. Both have been involved in different volunteer efforts since the first week of the war, and without directly comparing their current activity to their previous ones, it was clear that the first week was very different from ladling out bowls of soup. Carolina’s initial role had placed her at a temporary shelter for incoming refugees during the earliest stage of the crisis. After one week it was shut down.

She laughs with some exacerbation. “It was quite disorganized….”

I’d observed this during my first days at the station, when a seemingly endless influx of refugees clashed with those already there, as well as hoards of volunteers, Jehovah’s witnesses, clowns with balloons, news organizations and random European individuals or groups who’d come to offer people a home back in their countries. So, I can well imagine the scene from her first week in the impromptu shelter.

Initially, Kasia had been involved in a dispatcher role, coordinating volunteer drivers that journeyed from Krakow to the border to give the incoming refugees a ride. I think if Poland had its own version of the PTA, Kasia would be a leading member. She brought up parents or kids or school quite a few times. She mentioned she had also helped start a database of Krakow-based parents that could host people for a night or two – temporary stays before another option became available; something besides the train station floors, or the rows of rigid cots that filled some rooms there. But as the necessity of these roles phased out, they found other things to do, including serving soup, which is where I found them. The actual sourcing, collection, and distribution of this soup will hopefully be another story one day (I think it is a special project worth writing about). I asked them if they were asked many questions by refugees e.g. how to arrive at location X or even where they could go from here, but they shrugged and said that whenever they are questioned they silently point to the Caritas food distribution room opposite which is stocked full of free food, and also Ukrainian/Russian speakers.

The second interview was with another set of polite Polish ladies named Ana and Barbara, again both probably in their early to mid-30s. I found them standing in front of the ticket offices with a baby stroller that contained no babies but did have an array of pet food for dogs, cats, birds and maybe mice or other things too. It was a highly visible location to be at in the complicated layout of the station and shortly I understood why. The day before - Ana’s first day doing this – their distribution site had been deemed a security risk and they were told to give away their pet food somewhere else. They had creatively decided to go mobile, and so there they were, with their brimming carriage which they pushed around the station, advertising aid to anyone with a furry companion. The pet food is donated by individuals from Krakow and from afar, and they even have a room in an obscure hallway where they receive and sort all the treats and food. It was only Ana’s second day in this role, although Barbara had been involved previously with a food center activity. Our talk was interrupted by a Ukrainian lady who took some cat food and proceeded to show them pictures of her cats. In a period of a few hours over two days, Ana said maybe five people had approached her for food.

My first interview was with Valeriia Pshenychina. I approached and asked her, in Polish, if she spoke English to which she replied, in Polish: “Yes”. She also spoke Russian, and Ukrainian, and maybe another language also. I didn’t catch all of her reply as I don’t speak Polish. Varliia Pshenychina is a young Ukrainian girl who arrived here in Krakow three weeks ago. She was doing something I’ve noticed many people do, giving away free T-Mobile SIM cards to the incoming Ukrainians (and as I’d learn, to anybody going into Ukraine). One of my standard questions for these interviews was: “Have you noticed a change in the amount of incoming refugees since you began volunteering here?” She replied: “Yes of course. Now there are much less.” This I already knew from my own two weeks here. Then she mentioned something I had not known – besides many of the refugees going onward to different areas of Poland or different countries in the West, many were already returning to Ukraine. Not, as she emphasized, to a place like Kharkiv or Mariupol but to somewhere safer in the western regions. At first I was a little shocked by this, but then I considered why – many miss their homeland, and they don’t want to leave it behind.

Before starting each interview I showed everyone the questions I would ask, written down in my notebook. The last question on my form was heavy and open-ended: “What have been your impressions since the start of the war?” To Valeriia I said: “Don’t tell me now.” Instead, I gave her my contact info in the hope she would reach out to me for a more in-depth interview, or work as my translator for a day. Ana and Barbara, I forgot to even ask. But I did get a response from Carolina and Kasia, and the latter said this: “I was so anxious at first, all the time. I could not stop watching the news. I grew more and more worried every hour of every day, seeing how bad things got so quickly...But then I took action. I offered to help, and since that moment I’ve not felt anxious. I’ve felt in control.” And that concluded my interviews on the first of April.