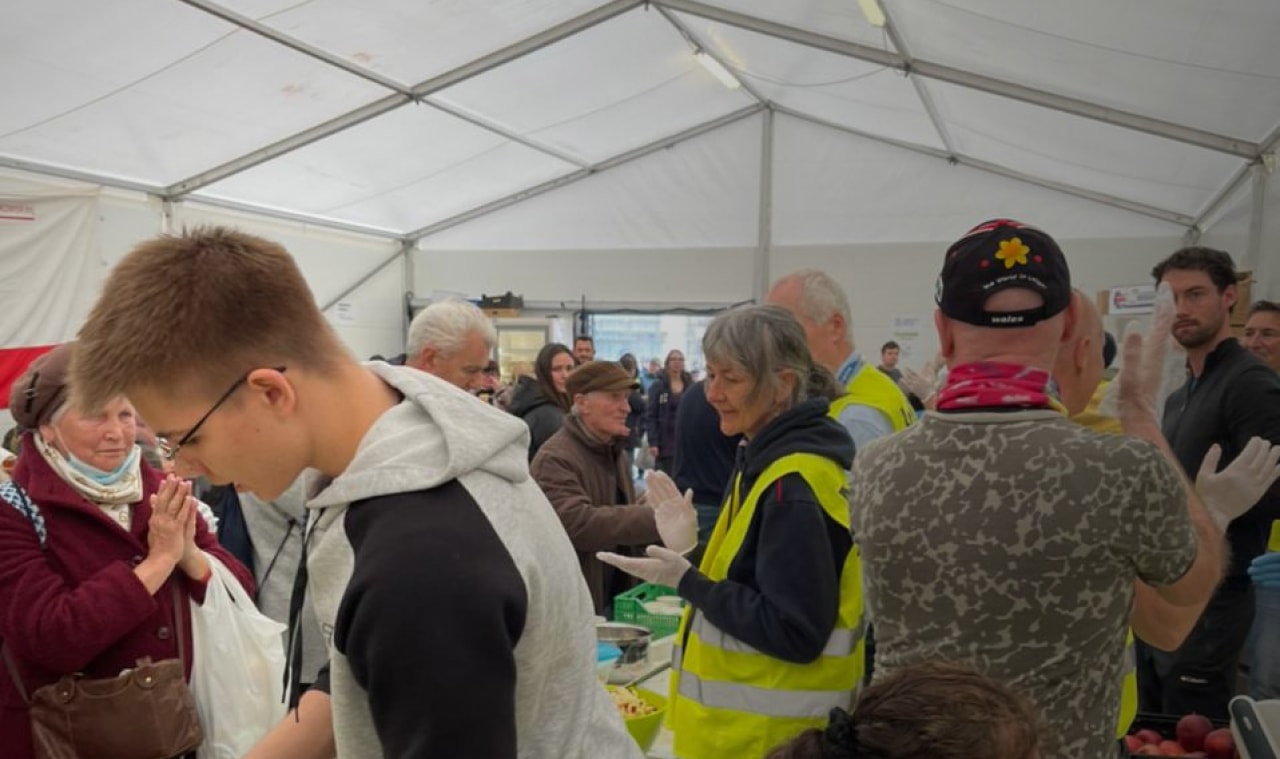 He is the first Ukrainian teenager that has come to help us cut fruit in the World Kitchen tent, which serves fruit to about 1000 refugees every day. At first, I just assume he is Polish.

Sitting next to Alex is Teresa, a lovely Polish lady that has come every day to help since her first day. They are speaking Polish, so I just assume he is another Polish volunteer that comes on their free days or breaks from school. But then Alex switches to English when I arrive to say hello. He says he is not Polish; he is from Kiev but since his life is now in Krakow, he wants to improve his Polish. He says he has been here for three weeks now with his mother and grandmother.

Alex is soft-spoken, often careful in his choice of words because he isn’t so confident with his English. But as I’ve been an English teacher to Spanish students for four years, I know he already has an exceptional level. “So on and so forth,” he says early in the conversation. I stop cutting fruit: “Excuse me? Did you just say you’re not good at English and you used the phrase ‘...and so on and so forth’?” Alex is naturally humble, naturally intelligent, and naturally special. He wants nothing more than to help his people, and if he can’t be back in Kiev with his mates preparing defenses, shuttling body armor and other equipment to soldiers, (and so on and so forth) he will help here as best he can.

For the next two hours he lets out a little of his story – holding back a torrent of emotions as best he can – but enough to show us that his is but one story of millions right now. But I wanted his story so, so bad. For the next few days I gently prod him for a short interview after we’ve finished our food-serving duties, and each time he smiles like he is amused but not committed to this. “I do not deserve attention. Those that stayed in Ukraine are the ones that deserve attention.” But then he says: “Yes, ok after here we can,” and for the next few afternoons we go for a drink/food with our volunteer group; however, the moment never feels right for him so he excuses himself to go either to the embassy, or to help his mom with something, or to school. That first day I met Alex, he was still 15. On Monday 4th of April he celebrates his sweet sixteenth as a war refugee, cutting and serving fruit in a World Kitchen tent, in a different country to his own.

I did not have a lot of time to prepare myself for this task. In two weeks I had to organize my departure from Spain, prepare myself mentally and strategically, and decide how to best use my limited finances for certain equipment. In the end, I bought a nice sleeping bag, warm hiking-pants and a new pair of shoes, but no new phone or computer (which are equally important). My laptop functions fine, but the frame is cracking so it only has so many open-and-closes left in it. Also, the 2-w-s-x keys need some forceful persuasion to start typing. So, from the beginning, I had planned to donate it to someone who could really use it and buy myself something cheap but not splitting apart. After meeting Alex, I knew he would benefit most from the computer.

But this humble kid does not want anything from us volunteers, he just wants the chance to help with something. He does not want an interview, because he doesn’t believe he deserves any attention. But when I mention to him that I will be leaving Krakow for a few days to explore the border and that he can use my computer while I am gone, his eyes light up. It is the first thing anyone has offered him that he accepts. The reason is that Alex cares deeply about his education, much more than I ever did. Every school in the district of Kiev has a school president that oversees school events and collaborates with other school presidents. Guess what – Alex was his school’s president. His parents are both doctors and, in our short time together, I see how much he cares about not letting this war interfere with his education. So, after offering my laptop for a few days and seeing his reaction, I start to think about how I can give him something more permanent.

The initial idea was just to give him this half-broke computer for all his Zoom classes with his schoolmates back in Kiev and to prepare PowerPoints and other homework assignments. That, or buy him a cheap, second-hand but still useful laptop. I mention this to the fruit station’s new and generous leader Mark, and two days later he tells me he’s fundraised a few hundred dollars towards a new computer. A new computer? Great! I would contribute a couple hundred also and we would find him a good and affordable computer to work with. A few days after Alex turned 16, we go shopping.

We are in the MediaMarkt store at 9 am and looking at the cheapest computers they have to offer. Suddenly I get a call from another amazing, generous volunteer, Mike from England. Mike asks if I got the very generous donation from him and his family towards Alex’s new computer. I was surprised, confused, and just amused that my simple idea to donate my troublesome computer had now become a real gift, a real computer for a boy who just turned 16. I go tell Alex that his budget has almost doubled and to stop looking at those crappy Asus models and find something a bit nicer. About 40 minutes later we leave the store with an amazing piece of equipment, and the kid looks just like me as I left a Staples store 10 years ago with my own first laptop. A good student just got some good equipment.

THE STORY OF ALEX

I never stopped pestering Alex about the interview I wanted. And while we were in the store waiting for his mother to join us he finally relented. I took out my phone and began recording Alex’s story:

When did you come here (to Krakow) Alex?

I came here on the 5th of March.

Why did you (and mother and grandmother) leave Kiev?

It was really quite difficult to stay there. There were a lot of bombardments in the day and a lot of alarms. And then when we heard guns shooting on our street we decided to move because my mom and dad were really scared about my life, about my future.

So a lot of your friends are still in Kiev?

Yeah, they are staying there and they are helping our army. Like cooking food, trying to find some clothes, some armor for them.

What do you miss most about Kiev? I mean I know your friends and..

Yeah friends, and as I was the president of my school we had a lot of meetings with other presidents from other schools, from all Kiev, and we were planning some events. And it was really great and now I miss it.

When we first met, you told me about being the president of your school...you guys are in charge of these trips/events?

Yeah, we’re in charge of making some events, in all of Kiev and in all of Ukraine in general. Yeah, what else haha? Making events, making some meetings with other presidents, some [meetings] with famous people in Ukraine and making good studies [creating study groups, programs to better study] with other students.

So before the call you were explaining the president thing, I was going to ask – do you have a girlfriend from another school that’s also a president?? Light-hearted question

Is it more boys or girls that have this role?

Girls. There are 10 districts in Kiev and in my district there are 50 schools and yeah, there are a lot of girls but [only] 10 or 11 boys.

Ok Alex, now a more difficult question: do you know right now what’s happened with your home, with your neighborhood? I know your father is still there but is he still in your home?

No, he’s a doctor so he’s helping other people (Alex later tells me that for his father’s safety he does not even know his location.) And yeah, it’s difficult for me to ask him every single day if everything is ok... and is he alive... I can’t explain in words. And I have my neighbors; my friend is living near my house and every day he tells me it’s ok. So I’m happy that my home still stays [stands], and yeah, I hope of course when I come back I’ll start repairing houses of other people and I’ll start volunteering, because it’s my behavior [it’s in his nature].

Ok Alex, so last question I promise. What would you tell people from my home that might not know or understand a lot about this situation?

You mean what I can say to the American people?

Well, you guys had problems in 2011 [Alex means 2001, referencing 9/11 to Americans]. It was really, really difficult to understand, to even imagine, what the situation was. But now it’s... I can’t say that it was more difficult than now but I can say it’s difficult. Now, there are a lot of people there just lying, dying on the streets near Kiev. And for Americans I think you can just help, just help how you can. With clothes, with donations, with volunteers. To try to protect people who are staying in Mariupol because they don’t have an opportunity to communicate with the open [outside] world and they’re just sitting there surrounded by the Russian army and...they’re just surviving, not living.

One thing I’d like to note is that after turning the recording off Alex was still visibly emotional, as he is every time someone asks him direct, personal questions about the war. Alex says that if he was 18, not 16, he would not be here, safe in Krakow. He would be there, surrounded by the daily bombardments and sirens and the knowledge that every day might be his last. But still, he’d be home defending his country with his friends and countrymen. And he wishes for that so much more than he wishes to be safe. Have you ever met a 16-year-old like that?