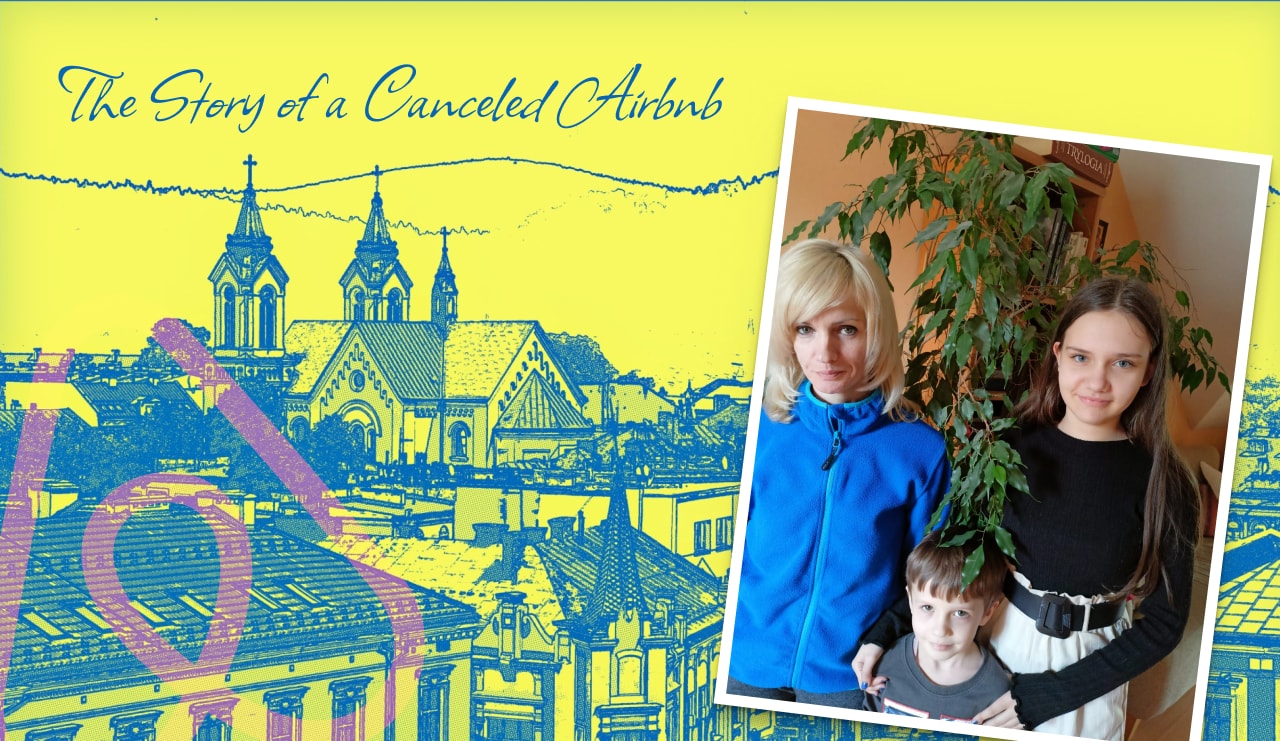 What do you miss most about your home? I understand everyone will say family, friends, and home. But what else about your city do you miss the most? Besides these fundamental choices, what else?

The normal life. When you have plans and projects. When you live as normal people. You wake up every morning, you prepare food, you go to work…You know? The normal life. Now she lives another life, and she feels like she’s living the life of someone else.

I had already made the car rental reservation from Thursday to Tuesday. I would go to the town of Sanok, maybe the last real town before you reach the villages that straddle the Polish/Ukrainian border. I was scanning through the best choices for an Airbnb when I found an available room in Agnieszka’s beautiful little home, nestled in the Polish countryside just outside of Sanok. Peace and rest were my primary reasons to leave Krakow for a few days. Second was to catch up on writing projects. Third was to visit those little villages on the border and get a first-hand perspective of the situation there. I clicked ‘reserve’ and felt very satisfied. But about thirty minutes later Agnieszka canceled my reservation with the message: “Sorry we cannot host you at this time. We have Ukrainian refugees in our home.” Then one more message came: “Feel free to come visit us for a coffee or tea.” I instantly knew that I wanted to visit, but not only for refreshments.

Then I completely forgot to reply for the next few days; busy being sick and busy with a million other thoughts. But after arriving in Sanok on Thursday afternoon I remembered her message and sent the reply: “Agnieszka I would love to come visit for coffee or tea.  But I want to tell you that the reason I'm traveling around is because I'm working for an NGO and they've asked me to do some reports in Poland and try to interview some Ukrainians, to better understand how the war has changed their lives. I would love coffee no matter what, but if you, and maybe your guests, would like to tell me your/their story it would be fantastic.” Agnieszka asks her guests if they mind sharing their story with me, and a little later she answers with a suggested time; tomorrow at 6:30pm, and she would translate for us. I agree.

I enter the charming home of Agnieszka and Adam and am immediately offered a refreshment, a chair at the dining room table, and introduced to Julia. Her bleached white hair, pale-white complexion and snow-white turtleneck strike quite an image; a Ukrainian mother, outlined against the white wall and white tablecloth separating our chairs at the table. A moment later, I meet her children, six-year-old Yarik and twelve-year old Alona. We say hi to each other, the children go to play with the family cat in its scratching tower next to us, and we sit down. I begin to hear their story.

This trio entered Poland on March 20th, just a few days after me. I had flown directly from Madrid to Krakow in three hours. Their flight - from the northern city of Chernihiv to the Polish border - took three days. The normal route south from their home to Kiev is about 160 kilometers and would have taken just a couple of hours on any given day pre-war. This time, the trip took thirteen drawn-out, excruciating hours; winding through back-roads in a convoy with a military escort, thinking that behind every bend in the road could be waiting Russians. This wasn’t a senseless worry – from all major cities at that time there were incidents of Russians shooting back at refugee convoys, into the cities they had just tried escaping from. For this reason, Julia’s brother, a captain in the military, organized their own escort of soldiers tasked to safely deliver these women and children from the unfolding hell of Cherniv. On March 17th they left their lives behind. Thirteen hours later they were sleeping on the floor of a school outside of Kiev, waiting for the sun, and the continuation of their journey. (And what a time they chose; a few days after Russia had bombed the last major, intact bridge out of the city).

Before leaving, Julia had asked which route they would take but the response was a void; if any messages indicating their chosen path had been intercepted, that would have drastically increased the odds of an ambush.

Besides the luggage they could carry out, they clutched fear; the ravaging question: “Is this a good idea. For us. For our children?” But Julia knew they had to try, because the alternative was clear; the risk of a slow death from lack of basic supplies, or a missile strike, or even gunfire on their streets.

I ask: “When did you know you had to leave?” It was not because the day Julia left her home, she had narrowly avoided a missile strike that had obliterated a nearby building and sent her to the ground bloodied. It was not because of the massacre of ten people waiting in line for bread by a suspected Russian gunman. And it was still not because for days they had been completely cut off from running water, electricity and food (Julia explained that some people had anticipated this, and prepared by filling whatever bucket, bowl or available cup was around with water). Agnieszka translates: “They say they lived like primitive man. They had to go to bed at 5pm because there was no electricity and they would wake up when the sun came up. And they stayed all day at home because it was dangerous to go out. Only Julia went out to buy something to eat, but every time she was afraid she would return, or not.”

The reason Julia finally decided it was time to go was because a little girl had died from lack of water. Her family must not have believed they’d lose running water, and had not prepared like others had. This death was the incident that confirmed to Julia that for her and her children to survive, they would have to flee. Her mother, husband and brother would remain, but she, Alona and little Yarik would take the risk and chance an escape.

The second day of their evacuation must have been tense and unnerving, yet hopeful. They made it out of one of the most heavily occupied areas of the country in a surreal trip. At the end of the day, they took shelter in a building that doubled as a coffee shop. In the daytime it was open for business, while at night it was a center for refugees. Agnieszka tells me: “It was a special (coffee) bar, open during the day but during the night it was a dormitory for the refugees. I don’t think it was the first time they had done this.” She continues: “They had never been so far from their city before. They’d never left Ukraine. They went to Poland with no passport, only a Ukrainian identity card.”

I think the last day of their trip passed with little incident. I am not told how it ended, nor how Julia and her children arrived in the warm house of Agnieszka and Adam. By this time, two hours of questions and carefully thought-out translations by Agnieszka had passed. Before I know it their son, who was visiting for the weekend, enters the home and tells us the barbeque is ready. Time to stop. Time to eat and talk of other things.

All evening Alona and Yarik had been in and out of the living room we were sitting in; playing with the cat, having a small pillow fight, drawing some pictures and appealing for ice cream (this last one was just Yarik). I asked how the children had changed, and what it had been like since they’d arrived. Agnieszka says that Alona is like her mother, responsible, a good sister; she does not like to show emotion, and has not visibly changed much since their arrival in Poland. I say there is an appropriate adjective for this – steadfast.

Yarik was different. For his first few hours in this home, he was still terribly frightened. But then he calmed down. Agnieszka explains: “Yarik started to speak in Ukrainian, to speak about some…. some adventures. Once he said: ‘You know, in the house the bomb fell and suddenly it wasn’t a house, it was in pieces. Oh! Here you can watch some videos about how my city was destroyed’. You know he’s a child and he starts to talk about war, and then the next moment he’s a child and he starts to talk about child things… he shows us silly TikTok videos like a normal, happy child.”

What do you miss most about your home?